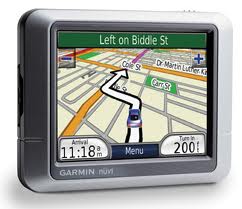 In March, I drove north to visit my daughter.

The night before I left, I called her. “What’s your address again, sweetie?”

She sighed. The last two times, she had to come find me so I could follow her home. Embarassing!

“I’m going to run it through Mapquest this time,” I said. “That way, I have it all written down just in case I get lost.”

Well, when I put the address into Mapquest, I wasn’t paying close enough attention, I suppose. I found out the hard way that there are two different residences with identical street and house numbers. One just happens to be on the NW side and the other on the NE side. I, of course, went to the wrong side and . . . you guessed it. My daughter had to come get me again.

So, before I made the trip in June, I bought a GPS. I named it Ammee(Short for American English). Even Ammee got frustrated with my lack of direction (I get lost in a four bedroom house). A few times my wrong turns seemed to frustrate her. Then there was the time she  said, “turn left, Turn Left, Turn LEFT, TURN LEFT!” She wanted to call me an ugly name, I could tell by the tone of her voice. But she held back. I’m surprised they don’t equip them with four-letter words for such occasions.

Anyway, Ammee got me to my daughter’s house with little or no trouble. And, she was still speaking to me when we started home.

My sense of direction is so bad. I’ve always worried when I had to go somewhere for the first time.

Not with Ammee riding shotgun.