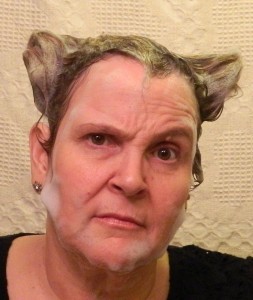 Okay,  so the director made me take the photo up there as promo for Cat-a-tonic. I was a bit resistant. But . . . here it is, just the same.  And here’s some more about the entire show. We’re in for some fun nights and if you can make it to the show, you’re in for some fun too. 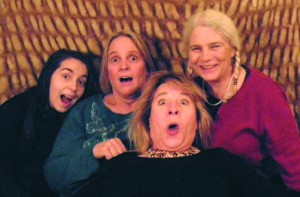 Ashland, Oregon:  Five local actor/writers present multi-character monologues along the lines of Lily Tomlin’s “Search for Intelligent Life in the Universe.” These funny, personal, original pieces take you into new theatrical territory. According to Lyda Woods, the producer, you will: “Meet Ratsmacker and his 30 feline siblings, watch a schizophrenic babysitter play his mind at full volume, visit a young woman on death row, and achieve neutral buoyancy.”

The show plays Friday, Saturday, and Sunday January 4 and 5 at 8 pm, and Sunday, Jan. 6 at 2:30 pm. at the Ashland Community Center, 59 Winburn Way in Ashland. Tickets are $12, available at the door for cash or check, and online at Brown Paper Tickets (http://www.brownpapertickets.com/event/308800).    This production is sponsored, in part, by the Ashland Contemporary Theatre.

Lyda Woods performs “Ozma’s Storm,” a piece about a psychiatrist mother who gets her favorite mental patients to babysit her daughters. Lyda has run the entertainment production company, Gumshoe Gourmet, for 8 years, producing shows for the Ashland Springs Hotel, Eden Valley Orchards, Harry & David, the Children’s’ Miracle Network, the American Cancer Society, and others. She teaches Writing at Rogue Community College and founded Levity Improv: Lighten Your Heart, an improv group that performs throughout the Rogue Valley.

Cynthia Rogan performs “Catatonic,” which explores the life of a cat hoarder whose memories intrude on her present. Rogan, a playwright and novelist, discovered through adolescent eavesdropping that characters are everywhere. “We all have our stories and our problems and our own way of looking at the world. And we all have the ability to touch someone else. So, we are never really alone.” Rogan’s novel, Symphony of Dreams, was published in 2012.

In Susan Knapp’s, “The Real Story” a woman on death row tries to convince a reporter to help her get clemency for a murder she blames on her circumstances. Knapp is an east coast transplant who arrived in Ashland 4 years ago. She’s been writing for a long time, but this is her first performance piece.

Amy Katrina Bryan who performs Knapp’s piece, is an equity membership candidate recently seen in “Cabaret” at the Napa Opera House, and as Helene in The Willow Theater production “A Doll’s House”. Amy works in Southern Oregon as a  music and acting coach as well as the drummer for the band “The Stamps” which are preparing for a tour in L.A and New York in the summer.

Zinkand performs “Neutral Buoyancy, about a woman on her checkout dive, moved by a vibrant undersea world, playing in a kelp forest until she runs into trouble. Leanne is a fiction writer, graphic designer and scuba diver. She recently published her first novel, The Spaghetti Afterlife.