This year, I’m having a really big birthday. Can you keep a secret? I’m gonna be older than I’ve been in my entire life. But this birthday’s got me, wondering: Have I made a difference?
At home, I have this sign by my door that says, “You must be the change you wish to see in the world.” I look at it every morning as I leave for work. But nothing about my job makes the world a better place. I count money for a living. At work, if someone says the word CHANGE, they mean the green, silver, and copper kind.
But the kind of change I need comes with growth and new knowledge, and sometimes, lots of chocolate and maybe a little too much wine.
Change has always terrified me.
Right before I graduated from High School, Granny told me, “Cynthia, sugar. All life is is a bunch of changes all strung together. You can’t be afraid. It’s like a box in pretty paper all tied up with a bow.

In that box could be the best thing that ever happened to you. OR it could be the worst. If you never look, you’ll never know. But if you hear somethin’ hissin’ and rattling in there, don’t open it. Could be a snake.”

After that, I decided I’d rather help others change than open that box myself. Just seemed like a better plan. That’s when I started writing plays & novels. All these years, I’ve been waiting for my words to make it out into the world, to make a difference. And here they are. Still waiting. It’s not my fault. I did my part. I wrote the words. Do I have to sell them too? I can’t do everything. Unless, I quit my job.Yes!
No!
I am a mess. It’s this gargantuan birthday looming.
I realized last week that if I plan to be the change that sign by my door is talking about, I have to hurry. Somehow, I have to move to the express lane of difference-making.
So I consulted Ms. Google. When I asked her about “Women changing the world,” she had an answer right away.
I wasn’t surprised to learn that a woman invented the Pooper scooper. Or the bra. Somebody had to get us out of the corset, right? But Monopoly? The circular saw? Women invented so many important things and often someone else, usually a man, received credit for their work. That makes the next statement extra sweet. Eat your heart out guys. A WOMAN invented DUCT TAPE!

Ha!
Her name was Vesta Stoudt.
It was WWII. Vesta was doing her part packing and inspecting boxes of rifle grenade cartridges. One day she found out that the paper tape they sealed the boxes with was breaking when soldiers tried to pull it off. So there they were, under enemy fire, having to scramble and claw to open those boxes.
Vesta had an idea: A cloth based, water proof tape. She went to her supervisor, and his supervisor, and his supervisor and his supervisor. Everybody kept saying, “The war department’s not going to change the tape.”
So Vesta wrote a letter to President Roosevelt.
I’ll bet those supervisors were surprised when Johnson and Johnson started making army green Duck Tape (When they started making it in silver to close ducts during installation, they began calling it DUCT tape.)
That’s the very same tape astronauts used to repair Apollo 13 and 17.
Did you know, duct tape can double the trade in value of a rusty car. And it removes unwanted hair. And warts. The silver makes an unforgettable prom dress. You can even use it as a strapless bra. Just make sure you have some of that medical tape remover on hand. Okay? OR, ouch.
These days it comes in hundreds of colors and patterns and you can do amazing things with it. 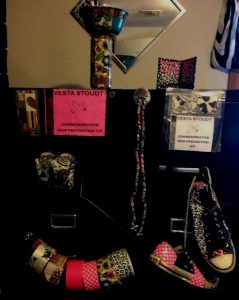 My favorite is a decorative snack dish that fits right into the drink carrier of your Lexus.

I know Vesta would have been so proud, but I wanted to use her tape in a way that would honor the spirit in which she created it; in a way that could be my express lane to difference making, and I found it.

It includes a 5-inch piece of duct tape that, when strategically placed (in a timely manner), can prevent any argument. In the interest of peace, please pick up a kit today.

Keep one in the dash of your car for family trips. Keep one in the pantry for quick dinner table access. And if you’re under the impression that your family doesn’t need a kit, send some out into the world.
Use them wherever you think they’ll make the most difference.
Join me in seizing this opportunity to be that change in the world. Let’s make a change that will stick.