Then came the story about how he was a Navy Seal and a sniper in Vietnam with 25 confirmed kills to his credit. And . . . the reason he always wore a sweater was to cover up his tattoos.

I was shocked. I always saw him as a sort of bland man who had lots of goodness to teach. I remember thinking, “Ah. There’s so much more to all of us.” It never occurred to me that I should check the story out. Why would someone take the time to concoct a story like that if it wasn’t true?

Well hell, I’m a novelist and playwright. I concoct stories all the time.

So, I checked Rambo Mr. Rogers. According to truthorfiction.com, Fred Rogers never served in the military. Lies . . .

And although margarine has many negative characteristics (including, but not limited to, taste), it was not originally created to fatten turkeys. Nor did it kill those turkeys it was not created to fatten. It was invented by some French guy in 1869 as a substitute for butter.  Lies.

Tonight, when my sister checked into her cabin on the lake and found a “Mosquito Eater,” she asked, “Have you ever seen one eat a mosquito?” 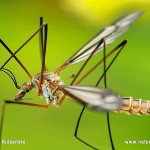 I haven’t. I decided to look them up, hoping to find evidence of the gore. But, guess what? Mosquito Eaters are really Crane Flies and they don’t eat mosquitoes. In fact, the adult Crane Fly doesn’t eat at all. Throughout my life I have felt safe from mosquitoes with them in the room. More lies!!!

Will they never stop? I suppose, as a writer, I can dish it out but I can’t take it.