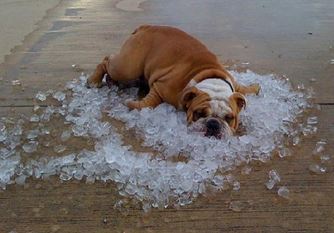 Happy sauna day. It’s hot. In fact, where I live, we’ve had weeks of temperatures over 100 degrees. But it is almost July 23 after all—the exact middle of Dog Days.

As a kid, I heard stories about Dog Days from my dad and his siblings. The one I remember most had to do with my dad stepping on a nail and having to soak his foot in kerosene because—as if stepping on a nail wasn’t bad enough—he’d done it during Dog Days. There’s a certain amount of bad luck associated with Dog Days: heat, fever, lethargy, sudden thunderstorms, lunacy, mad dogs, and—according to my dad—infections were more likely.

“Why do they call it dog days?” I asked, baffled by the slur to our beloved canine friends (and family). I never got an answer. The truth is humans use quite a few words and phrases to dog dogs: He/She’s a real dog. Dog Face. You’re nothin’ but a cheatin’ dirty dog. You lie like a dog. You’re dog water. And the one you can use in just about any sentence—Bitch. So, I just assumed Dog Days was another one of those insults.

I surprised to discover that diēs caniculārēs (coined Dog Days by the English in the 1500s) have been around almost forever, or at least before the rise of Roman Empire, and there’s a very creative reason behind the name. Sirius (sometimes referred to as The Dog Star), the brightest star we can see from anywhere on Earth, is part of the constellation Canis Major, The Greater Dog. In the summer, Sirius rises and sets with the sun. On July 23, Sirius completely aligns with the sun. Because Sirius is so bright, the ancient Romans believed it radiated heat in addition to the Sun, making the days even hotter. So Dog Days run 20 days before the alignment and 20 days after—July 3rd to August 11th each year. I feel better knowing the real reason.

I am a dog person. There are many dogs in my life, including the ones I use in my ads.

I gave Minnie Chance my dog, Creo, after I had to let her go. She got to start over as a puppy and Minnie named her Oreo. Now, she’s in a story that will go on forever. I have Sadie Mae, who is 10 and Pokey McGee who is going to be a year old this month—during Dog Days. They don’t appreciate the fact that I’ve been writing so much lately, but they love me anyway—I think. Sometimes, when I enter a room, I could swear they’re talking about me. I wonder if dogs have slurs that dog humans?

I can hardly wait to start work on the next chapter of Dangerous Haven. I’ll keep writing.